I have been having a little hibernation organising my files and doing some private writing. However recent pictures of Hollywood B movie actor Steven Seagal posing with Thailand’s dictator General Prayuth Chan-Ocha caused a retching moment. 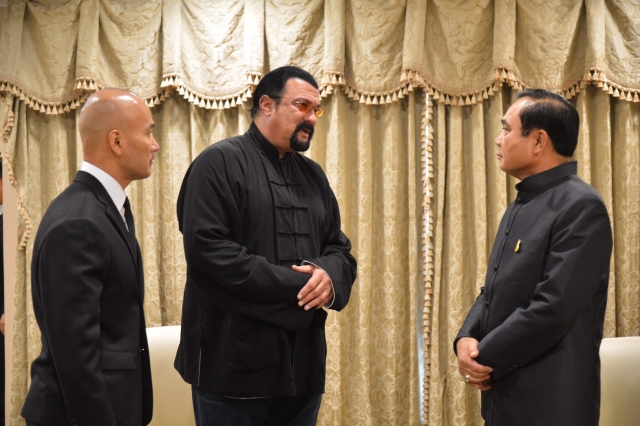 It’s not that I can stand the sight of this guy or his B movies which normally go straight to vdo. He may well have a big fan base. It’s the utter hypocrisy of the occasion.

It was one of those Glenda Slagg of Private’s moments. ‘Don’t it make ya sick!’

Seagal, it was reported, had come to pay his respects to the late King Bhumipol of Adulyadej.

He is also reported to be a devout Buddhist, lover of peace dogs, and all things good. On the other hand, he represents the Russian arms manufacturer ‘Orsis’ making promotional videos for the company and has described Vladimir Putin as ‘one of the greatest living world leaders.’

And his Hollywood career has been littered with complaints of sexual assault and harassment including allegations of keeping Russian sex slaves, sex trafficking and sexual assaulting a Vietnamese American woman he had hired. Just Google. it’ll keep you busy for half an hour.

These he has successfully fought off with expensive lawyers and reported sizeable under the table payments.
He has also been described as the biggest jerk to have been on ‘Saturday Night Live’ in the U.S.

General Prayuth and Steven Seagal seem to have a lot in common humour wise. Top officials of Thailand’s Department of Public Relations were there hoping that Seagal could improve Thailand’s image.  Some foot shooting going on here.

Having been in Bangkok for many years during his visits. I can say with confidence it’s true he does have a special love for Thailand and especially Thai women.

This and his activities at the Sheraton Hotel, Sukhumvit, between the Cowboy and Nana sex entertainment areas (though I do not think he personally entered these area) were the source or problems between him and local facility companies.