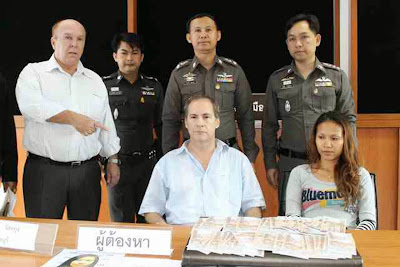 Foreign crooks who have taken to using Thailand’s Computer Crime Act libel laws to stifle people exposing their sleazy activities in Thailand like to keep the cases running as long as possible in the courts.

Brian Goudie, the fake British barrister accused in Pattaya court of defrauding a 76-year-old American woman out of nearly a quarter of a million dollars has for instance been claiming he has a ‘heart problem’ in another recent case brought against him.

But nothing could top the story given by the fake American lawyer Drew Noyes, of One Stop Service Center, Pattaya, at Pattaya Court today.

Drew Noyes (pictured seated above when he was arrested), who is appealing a sentence of 2 years in jail for extortion in Pattaya (Putting on his Pattaya Times mantle he demanded 7 million baht from Australian Michael Goulet to be allowed to operate the Thonglor Clinic in Pattaya) has so far come up with ‘jet lag’ and ‘painful nether regions’* for delaying court proceedings.

But today he told the court, in a case in which he is suing the alleged owner of the website SubZeroSiam, that he needed a delay because his lawyer’s mum had been admitted to an ICU in Bangkok.

He said that he would rather she attended on her mother as he wanted ‘quality legal representation’ not a lawyer who was thinking about her mum.

This all comes from of course the boss of what he describes as the best law firm in Pattaya with a dozen lawyers on the books ready to deal with any problem.

But of course the lawyer he is using is not one who works for Pattaya Lawyers or One-Stop-Legal-Service-Centre, as, yes you’ve guessed it, he would not get the quality legal representation he needs.

He is suing SubZeroSiam over the publication of photo-shopped pictures of himself and Brian Goudie, from Falkirk (they became a criminal tag team) taking part in a gay parade in Sydney, I believe, and all leathered up.

(He also issued a writ against me, because I published a story saying he was suing SubZeroSiam, again using the picture. The words never said he was gay, indeed suggesting someone gay is not a criminal offence, nor should it be.

But in any case I was at pains not to point out that he was not gay, particularly as Noyes, now 60, had fathered a baby by his ex-wife’s 14-year-old niece and convicted paedophile Brian Wright was a close friend with whom he trawled through Pattaya nights together, and that he has fathered nine children by four different Thai mothers.)

*.
Noyes is currently pounding the ‘I love royalty’ route sending out messages on Twitter to that effect, and of course he is still claiming that he was been cleared by the FBI and has security clearance with the Thai Royal family.

This followed his story in his now defunct Pattaya Times saying he had been 14 years in service of the King of Thailand and had come to Thailand by Royal Proclamation to help the country out of the financial crisis in the late 90’s – as opposed to his real purpose which was to open girly bars.

He is still peddling his meeting with  one of the Princesses, as which he introduced American service veterans living in Pattaya to her, as proof of his regal status.  Take this video below for instance which he just put up last month. The occasion he referred to was years ago.

But of course Noyes was never cleared by the FBI. Had he been the enquirer would probably have been told that he had a history of larceny and burglary, had been in jail, and had been put on probation, and that’s on top of allegations made in the Wilmington Morning Star relating to property and share fraud, and demanding oral sex from junior female employees.

I am told Noyes was ranting again today.in the absence of the two judges.  Everyone was going to jail apart from him seemed to be a recurring theme.

These outbursts were accompanied by the sound of a chicken clucking from the front benches, to the amusement of lawyers on both sides.