The great thing about Thailand is the consistency.  There isn’t any. So people who were surprised by the arrest of Canadian-Hong Kong journalist Anthony Kwan for carrying a helmet and flak jacket will of course not be surprised by this picture of a woman jokingly taking an axe to her head in a brand new military’ surplus store in Pattaya.

These stores tend to multiply in Third World countries after military coups. 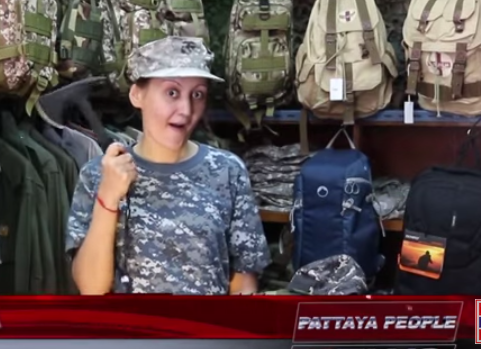 Bayonets, axes, knives and helmets are on offer to the public, says the narrator of the Pattaya People video who, I believe  I might have already mentioned, sounds exactly like the late Cyril Fletcher, a well know British gardener and actor and creator of the ‘Odd Ode’ on the former ‘That’s Life’ BBC consumer programme.

WEDDING OF THE YEAR 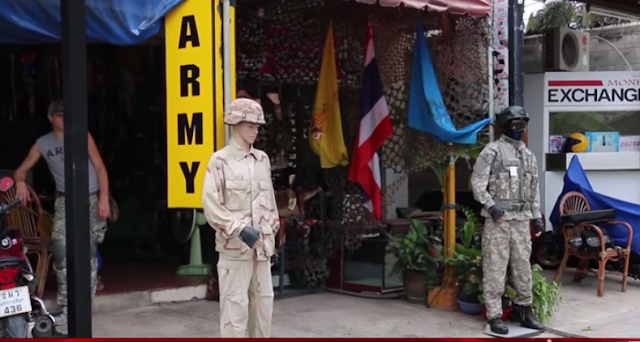 All this stuff comes ‘fresh from the warehouses’ of NATO’ goes the monologue.

Though those bayonets look rather ancient. 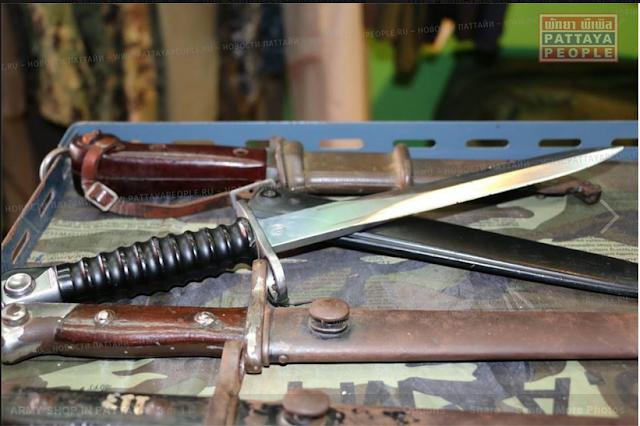 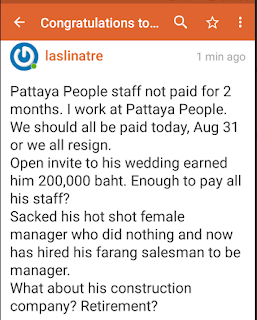 That may of course be because it was the wedding of Pattaya People boss Niels Colov, our famous former Copenhagen pimp who also became head of the Pattaya Police volunteers, chairman of Rotary and possible the most decorated foreigner in Thailand.

Not everybody was happy about the wedding it seems.  A poster to a website called ‘Pattaya Addicts’ seemed to think that the cash brought by guests in envelopes -- the traditional Thai way of saying good luck -- should be used to pay for the staff at the Pattaya People Media Group.

Its alleged they have not been paid for two months. But at least he has not stolen their pensions as Robert Maxwell did to staff at the Mirror. But that maybe because there are not any.

Unfortunately I cannot give you Cyril reciting one of his odd odes but I can give you an edition of ‘Not the Nine O’clock News’ where at 3 minutes or so there is a good mickey take.

Here’s a link to the celebrity guests

May 31, 2013 Andrew Comments Off on THE DAMAGE DONE – DRUMMOND MUST PAY SAYS DREW NOYES